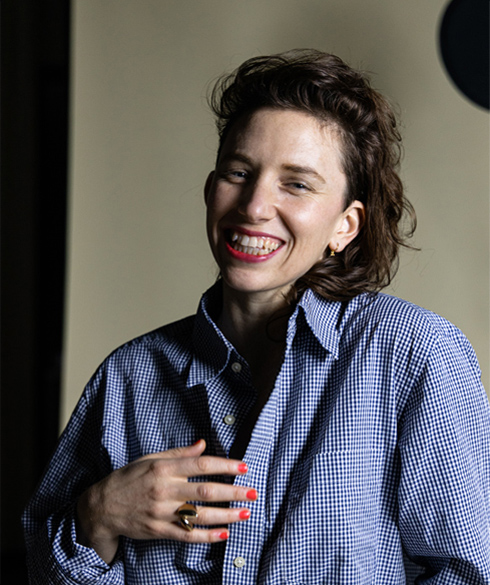 Mor Demer was born in Kibbutz Dvir in Israel, is a Berlin-based choreographer and dancer. She holds an MA in Choreography from e.x.e.r.c.e., ICI-CCN Montpellier (FR). From an early age she began dancing in the Hatzerim Dance School (IL) and between 2007-2010, she completed the professional dance training program at Vertigo Dance Company in Jerusalem (IL) and danced for the company’s young ensemble. In 2010, she participated in P.O.R.C.H. at pOnderosa (DE). In 2014, she volunteered for the Arts & Culture Foundation in Angola, and was the coordinator and facilitator of social activities within the Huambo province, e.g. orphanages, street children, women-led collectives, governmental organizations and local artists.

Mor is engaged in a holistic ecosystem of movement and performance practices, striving to develop new language for each project as a creative collaborator, instigator or maker. Her choreographic research cultivates sincere and bold presence tuning to a logic of emotional, intuitive immediacy; evoking states of high exposure and friction, poetry and precision. Demer conceives of movement and choreography as a decentralized terrain that works with simultaneous perspectives; her artistic practice incorporates drawing, writing, percussion and other crafts.

As a creative collaborator and performer, she has worked with Sara Shelton Mann, Maria F. Scaroni, Sigal Zouk, Anna Nowicka, Benjamin van Bebber, Magda Korsinsky, Keith Hennessy, Mark Tompkins and Tino Sehgal among others. Mor is a longtime collaborator of Peter Pleyer and Michiel Keuper, performing in their Cranky Bodies: a/company. Since 2016, she has been a collaborator in Meg Stuart/Damaged Goods company, performing in “Atelier III”, “Projecting [Space[“, “Violet” and most recently “CASCADE”.

In 2017, Demer made the trio ‘Oscillations’, curated as part of the emerging choreographers platform at the ‘December Dance’ festival in Bruges (BE). During 2020-2021, Mor was an artist in residence at DOCK ART (DE), presenting her dance solo and artistic publication, New Rear. In 2022, ICI-CCN Montpellier Occitanie (FR) published her master thesis in the editorial collection «exerce, écrits chorégraphiques». She is currently directing a long term topological research in Berlin called, ‘To Mend’, which instigates a series of participatory and transformative actions in public space. ‘To Mend’ sets the foundations for an upcoming performative work in 2023. Demer’s choreographic work has been presented in Germany, France, Belgium, Portugal and Israel in a variety of different venues and festivals.

My current artistic research dwells at the crossroads between the profane and sacred, exploring the potentials of prophetic sublimation in dance and performance. My essential practice is to enhance a sense of introspection, reverence and somatic orientation. Reveling between the synthesis of art, dance, rewilding, language, healing and cartography, I navigate existential mysteries of humanity; a creative curiosity arises from the exploration of polymorphic voices emerging between these semantic and physical fields. I grow to perceive dance as a conduit and a witness. Through my artistic work, the hope is to reconsider our place in this world and develop greater capacity for how we can participate with the co-creation of life; guiding us from one state of being to another; from this world to the next.

Ni OURS fanzine made and assembled with Sandra Wieser

Received a residency in the program of XXATENEUXXI, All space, at Ateneu commercial du Porto, Portugal